Three Scouts from Brazil drove a CJ-3B jeep from their home, to the Jamboree, to Alaska, and home again. This story is courtesy of The CJ-3B Page.

Even today it would be an ambitious expedition. In 1955 it seemed like an impossible idea, for three Scouts to drive from Brasil to Canada to attend the 8th World Scout Jamboree, on to Alaska, and then drive home. The CJ3B Page is pleased to present this story which will appeal to anybody with a sense of adventure, particularly those of us who were once Boy Scouts. —Derek Redmond 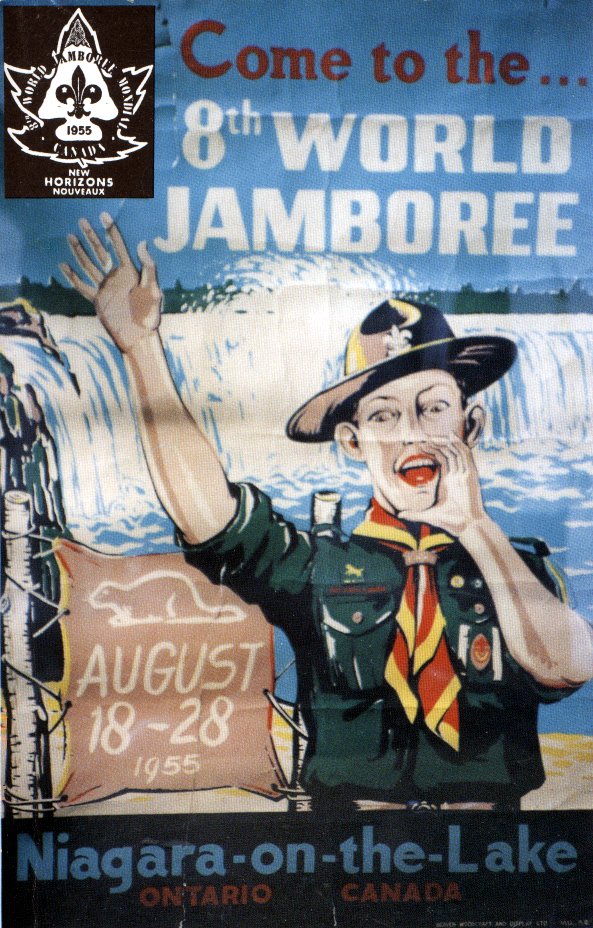 The 8th World Scout Jamboree 1955 would be the first major international gathering of Scouts outside of Europe. Rover Scouts Hugo Vidal, Charles Downey, and Jan Stekly, of Scout Troop Grupo Escoteiro Carajás in São Paulo, Brasil, probably saw this poster showing a Canadian Scout in front of Niagara Falls, and they dreamed of a trip through 17 countries along the new "Pan-American Highway."

Named "Operation Pineapple" because of the the tough, jagged, forbidding exterior of the tropical fruit, their journey eventually took 12 months and covered 72,000 kilometers. 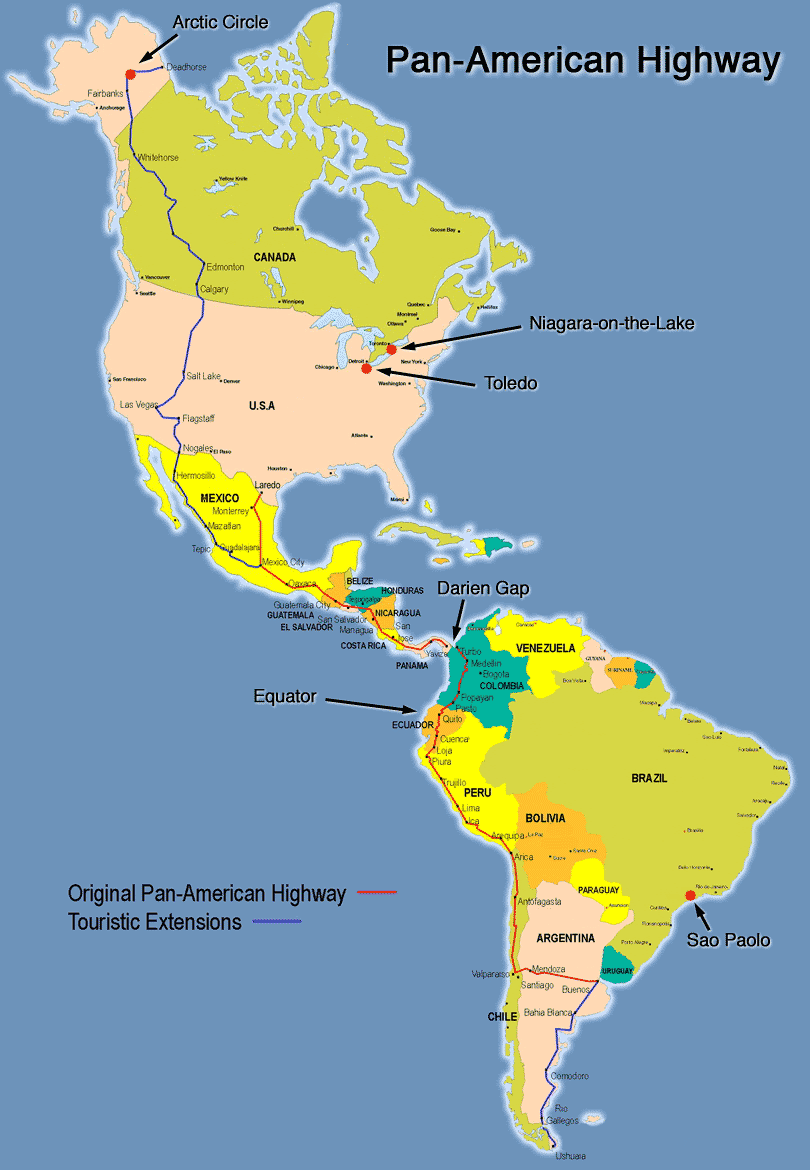 The Pan-American Highway is a network of roads nearly 48,000 kilometers (29,800 miles) in total length. Except for an 87-kilometer (54-mile) interruption of swampy rainforest, called the Darién Gap, the road links all the mainland nations of the Americas. According to Guinness World Records, the Pan-American Highway is the world's longest "motorable road", but because of the Darién Gap, it is still not possible to cross between South America and Central America by traditional motor vehicle.

The "highway" passes through many diverse climates and terrains, from dense jungles to cold mountain passes. Some stretches of the highway are passable only during the dry season, and in many regions driving is still occasionally hazardous.

Charlie (left), Jan (center), and Hugo (right) were given a Willys CJ-3B for the adventure, through the efforts of J.B. Versteeg of Willys Brasil, who was involved in the Scouting movement and had met its founder Lord Baden-Powell at the 1929 World Jamboree in England.

This photo of the Jeep was apparently taken on the 1956 return trip, judging from the snowshoes and antlers on the roof rack, the rear window covered with souvenir stickers, and the condition of the front tire.

The Operation Pineapple logo can be seen on the side, along with the names of sponsors including São Paulo Jeep dealer Agromotor, and steel hardtop manufacturer Carraço. Above the windshield is painted "Brasil-Canada," and below it appears to say "Equipped with Brazilian parts."

The Jeep was prepared with a 60-liter water tank, two spare 30-liter gas tanks, two spare tires, and a roof rack on the steel hardtop. It got a beefed-up suspension to handle the increased weight. Because of its pineapple paint job it was given the name "Green and Yellow."

Charlie was in charge of financial matters, and Hugo was the chief mechanic. Public relations and purchase of supplies was everybody's responsibility, along with washing the Jeep, and kitchen duties in rotation. Driving schedule was two hours each, with no extensions. The crew's motto was of course "Be prepared!" 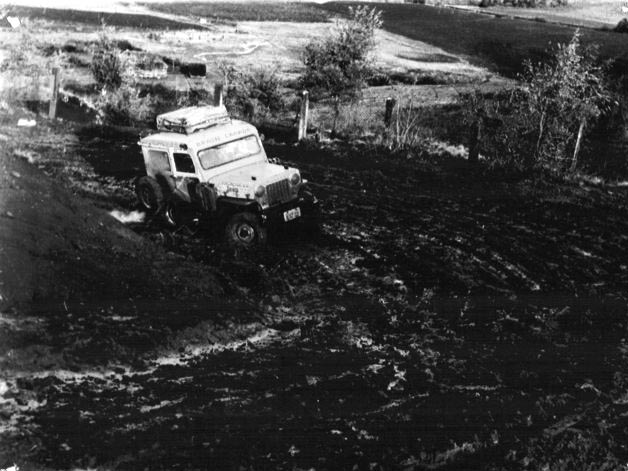 They left São Paulo on 2 April 1955, aiming to reach Niagara-on-the-Lake in August of that year. They actually headed south for Uruguay and then Buenos Aires, Argentina, to reach the official start of the Pan-American Highway. (See a map of the actual route travelled.) Rainfall meant fording water up to 70 cm (27 in) deep on this initial segment.

After removing the mud that literally covered Green and Yellow, they headed into the Andes, where they found cliffs bordering roads little wider than their vehicle. In Santiago, Chile, they got an enthusiastic reception from local Scouts.

In Valparaiso they saw the Pacific Ocean for the first time, but the Atacama desert soon meant extreme temperatures of heat during the day and cold during the night. With water in the radiator, they had to drain the block at night to avoid the danger of freezing. They also had to stretch their water, food, and gas to make it to Antofogasta where they could restock.

Detouring through Boliva took them though the salty region of Salinas, and the water and salt resulted in an electrical short circuit. Then the Bolivian Altiplano brought altitudes up to 4300 meters (14,000 ft), where it was necessary to adjust the carburetor. They took a brief break in Lima, capital of Peru, and it was June 22 when they left Lima, enjoying paved roads to the international bridge that marks the border with Ecuador, a bridge painted half in the colors of each country. 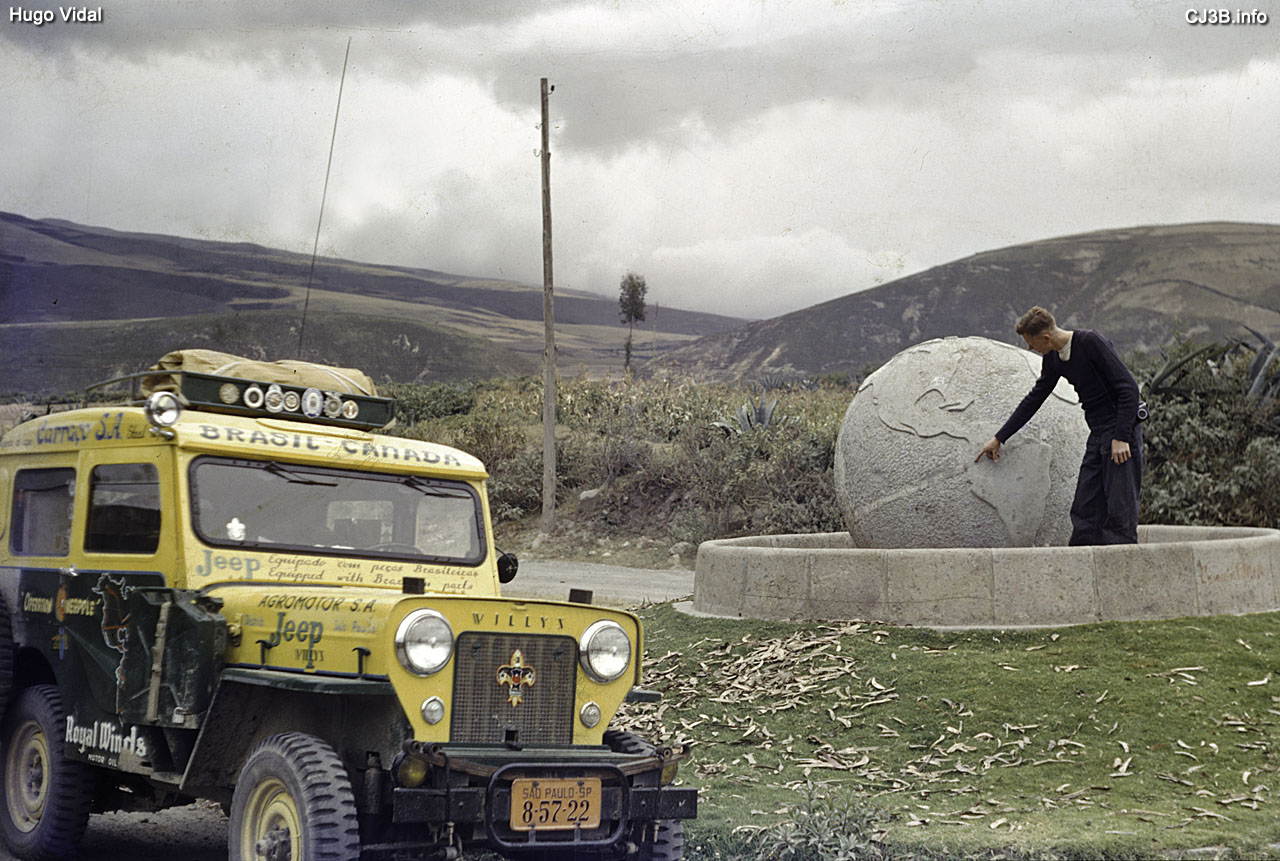 Ecuador was a challenge, with both high altitudes and lower areas of heat and humidity, where they crossed the Equator (right). In Colombia they decided to take aother detour to Bogota, the capital city. But on hearing that a ship would soon be leaving to Panama, they rushed to the coast, covering 1280 kilometers, including 700 in the mountains, in 51 hours. They arrived to find that the ship was delayed.

Between northern Colombia and southern Panama are the ancient swamps of the Darién Gap, impassable to vehicles. But Pan American Airways came to the rescue with a DC-4. With rear wheels and roof rack removed, the Jeep was loaded with only 2 inches of clearance, and flown to San José, Costa Rica, where Charlie, Jan, and Hugo enjoyed the friendship of Costa Rican Scouts.

Shortly after leaving San José they faced the biggest shock of the trip; on a muddy wooden bridge the Jeep slid off into a ravine and turned over. But the steel hardtop possibly saved their lives, and the Jeep suffered only minor damage.

After passing through Nicaragua, Honduras, and El Salvador, they were forced by highway and political problems in Guatemala to put the Jeep on a train for Mexico. From there it was relatively smooth sailing despite some heavy rain, and they reached the border with the United States on 11 August. In the next five days they crossed Texas, Louisiana, Arkansas, Tennessee, Kentucky, Ohio, Pennsylvania, and New York. 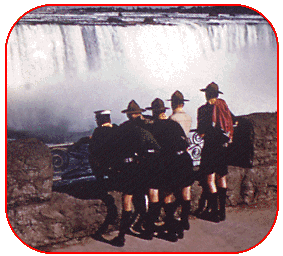 Four and a half months after leaving São Paulo, they crossed the Niagara River into Canada about 20 km below the famous falls, and entered the site of the 8th World Scout Jamboree, goal of their automotive adventure.

The setting was rolling parkland at the Fort George National Historic Site in Niagara-on-the-Lake. More than 11,000 Scouts from 71 countries and colonies attended this gathering, which was notable for the number of Scouts that crossed the Atlantic by air to attend — 1,000 from Great Britain alone. 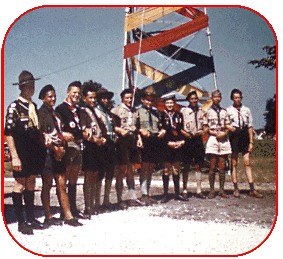 The Jamboree of New Horizons, as it was called, was held in a tent city next to the recently reconstructed War of 1812 historic site Fort George. The Jamboree was the first to be held in the Western Hemisphere, and saw the introduction of the World Membership Badge which is still worn on the uniforms of Scouts the world over.

Tales of the efforts made by Scouts to attend the Jamboree, in addition to the Brazilians in their CJ-3B, included the New Zealand contingent leaving four months ahead of the event and travelling over 30,000 miles. 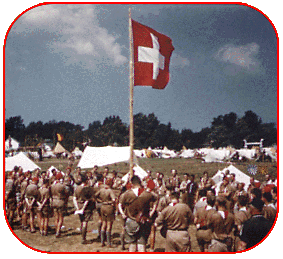 Sawyer's Inc.'s "View-Master" sent a 3D photographer to the World Jamboree to document the event, for a set of three View-Master discs in their "World Events and Festivals" series. The images seen here were scanned from those View-Master reels, and the rest of the 21 scenes are online at 8th World Jamboree. But as it says there, "These scans do not do the View-Master reels justice. They in no way compare to seeing them in the fantastic three-dimensional format." 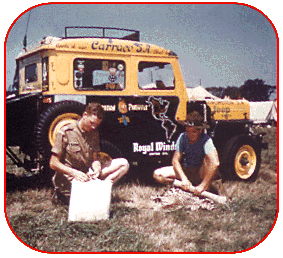 The most exciting find among the 21 View-Master pictures is this one, captioned "Brazilian Scouts and their much-travelled jeep." As well as details of the paint scheme, it reveals the cargo box mounted on the rear. The second spare tire is probably on the far side. 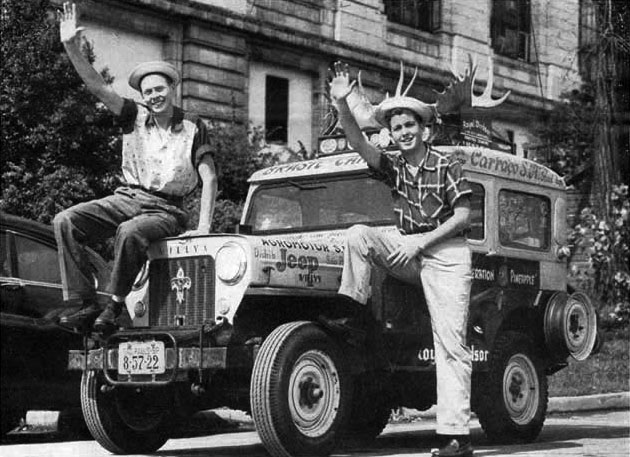 After the Jamboree, Charlie, Jan and Hugo drove back across the border to Toledo, Ohio, where they visited the Willys factory. They were still planning continue to Alaska, and the engineers at Willys found the 3B to be in perfect mechanical condition. With proper antifreeze in the radiator, they headed west to Chicago and then up to Winnipeg, Edmonton, and Dawson Creek, mile zero of the famous Alaska Highway.

The September 1955 issue of Willys News published this photo taken in Philadelphia. 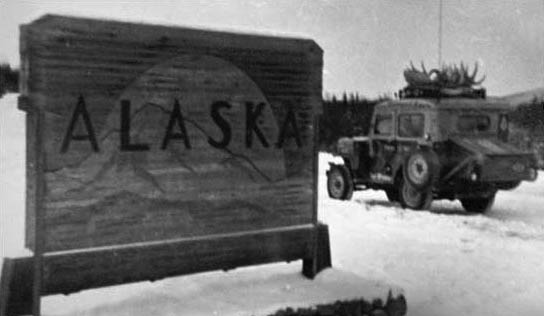 On 11 November they reached Alaska, where they stayed at a U.S. Air Force base. They wanted to reach the Arctic Circle, but at this time of the year it was only accessible by air. However, they travelled to Anchorage and to the settlements of Bethel and Kwethluk on the Bering Sea, and by courtesy of the Air Force they visited Fort Yukon, 12 km inside the Arctic Circle. 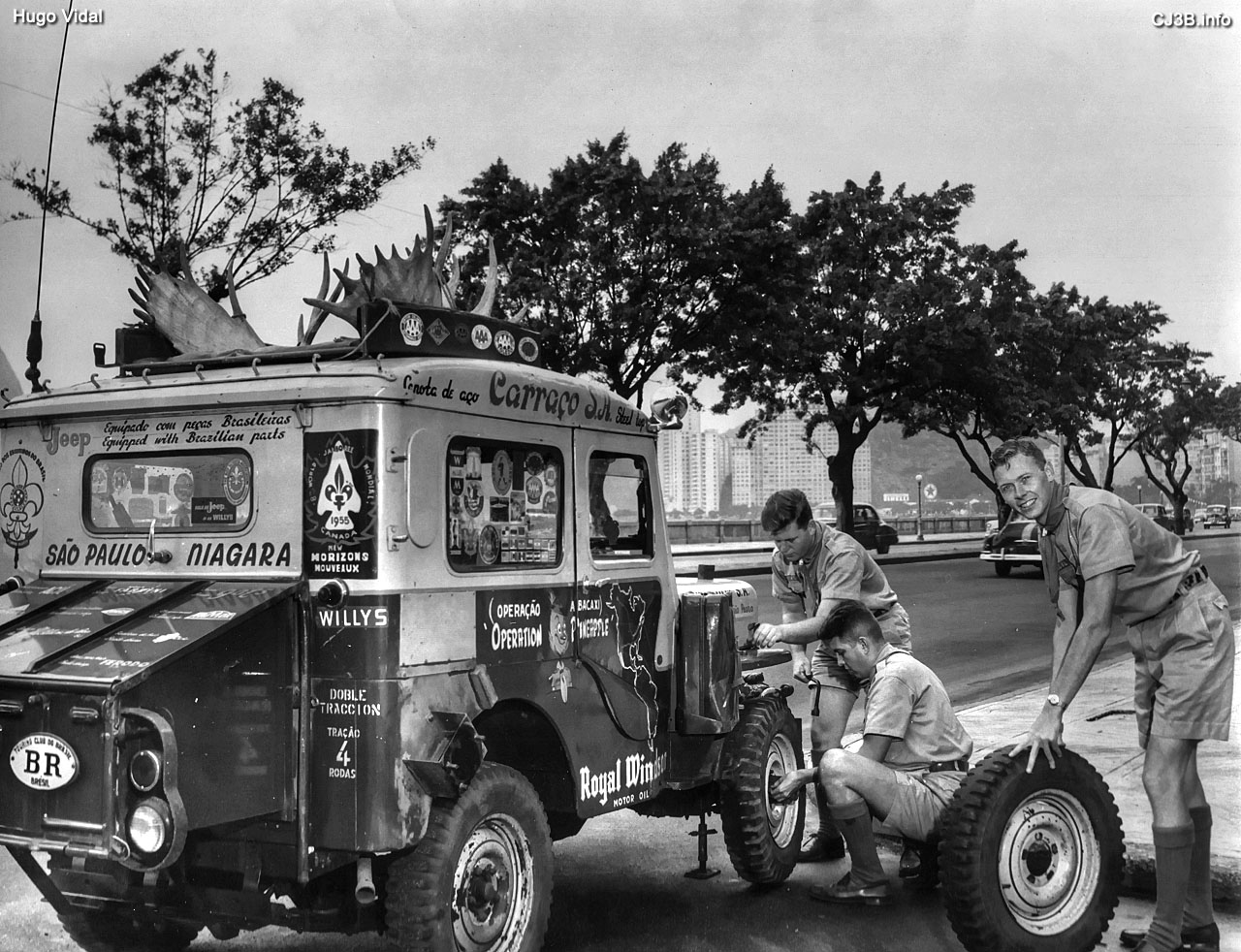 After changing a flat tire in Rio de Janeiro, Green and Yellow returned to São Paulo on 14 April 1956, 1 year and 12 days after its departure, and was welcomed by the governor and a huge parade. See a map of the actual route travelled.

It was a great accomplishment for the three Scouts, and we're proud that a Willys CJ-3B was part of this demonstration of the spirit of the Pan-American Highway and the spirit of Scouting.

As of 2009, Hugo Vidal is the only member of the trio still living. Having been unable to locate the original Green and Yellow Jeep, he is beginning the restoration of another 1954 CJ-3B. He says, "For years I tried and tried to find the real O.P. Jeep, going through national and state vehicle registrations, following many leads, contacting collectors, Jeep clubs and magazines, etc. Just for your information, the numbers (always in my wallet) are: serial 57438-15279-B and engine 4J-86619. Unfortunately this never materialized, so I recently decided to restore a look-alike, and found one in pretty good shape to start working on it."

Another article about this trip is "Operation Pineapple: Scouts crossing the Americas in a 1955 Jeep", published by Allpar LLC. This article was originally written in Portuguese by Rogério Ferraresi.

Thanks to Hugo Vidal, to Jonathan Govier and Grupo Escoteiro Carajás for preserving the story and photos of the Pineapple Operation on their website in Portuguese, and to Denis Silva (who has a Carraço hardtop on his 1954 CJ-3B) for telling us about it. Also Toby Shellard for his Carajás Scout Group Memoirs.

Additional thanks to Scouter Kevin for the View-Master photos, 8th World Scout Jamboree 1955 for the Jamboree poster, and Go-Panamerican.com for the basis of the highway map. —Derek Redmond