This article appeared in the Coleraine Chronicle, Coleraine, Northern Ireland, Saturday September 10, 1955. Only the first photo appeared with the article in print. The photos are courtesy of Bill Connor.

Patrol-Leader George Lyons, 3rd Coleraine Troop (Killowen) and Patrol-Leader Billy Connor, 1st Coleraine Troop, both Queen's Scouts, have just returned from the Boy Scout World Jamboree in Canada. They were chosen to represent County Derry in the party of thirty-six Scouts from Ulster.

In the following article, Billy Connor relates the outstanding features of their memorable experience.

The 8th Boy Scout World Jamboree was held at Niagara-on-the-Lake, Canada, the first to be held outside Europe. The British contingent comprised some 1,000 Scouts who flew to Canada in fourteen aircraft. They camped with 12,000 other Scouts from fifty nations.

George Lyons and I were chosen to represent County Derry at this great World Jamboree. 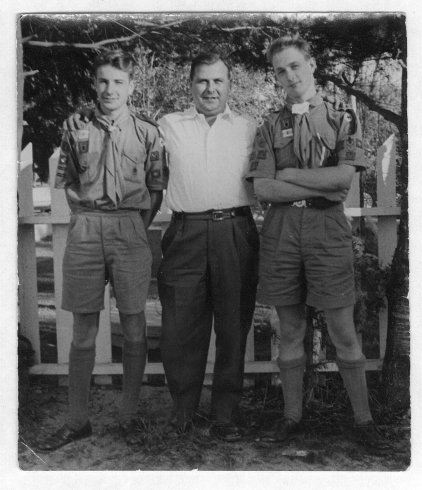 The Ulster contingent met in Belfast on August 16, thirty-one boys in all (five other boys had already left by sea). There was a farewell dinner in Belfast which was attended by the Lord Mayor of Belfast and Ulster Scout officials. After dinner we travelled to Nutt's Corner by special bus. On arrival at the airport we had to go through the usual procedure such as customs, etc. At 8:30 p.m. our aircraft appeared in the northern sky and within a few moments it had landed. The aircraft was an American Trans-Ocean Skymaster. It was powered by four Whitney Twin Wasp engines, each rated at 1,450 h.p. It had a maximum speed of 280 m.p.h. and a wing span of 117 feet 6 inches. 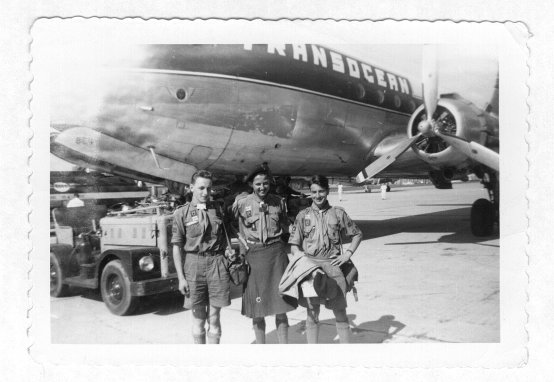 At 9:30 we were shown on board the aircraft. Five minutes later we were ready for take off. Our engines burst into life and the aircraft turned into the wind. Slowly we moved forward towards the main runway. The entire airfield was glowing with bright lights. On reaching the main runway our speed increased to 50 m.p.h., then 70 m.p.h. — the lights on either side of the runway raced towards us. With all four throttles forward, at 90 m.p.h. we were airborne.

At a height of 400 feet we banked to starboard to get our last look at Nutt's Corner and Ireland before climbing higher. After crossing the Irish coast, the Captain took the aircraft to a height of 6,000 feet and increased our speed to 200 m.p.h. At 12 o'clock coffee was served by our charming American air hostess, Miss Baumon.

We landed in Iceland (owing to bad weather) at two o'clock (local time). After breakfast we headed for Newfoundland flying at 10,000 feet. At six o'clock I went up to the flight deck with our Captain. From the pilot's seat I was able to see Greenland far below through a gap in the bed of clouds beneath. Our speed was now 220 m.p.h.; height, 10,000 feet.

We arrived at Gander, Newfoundland, at eight o'clock (local time). While our aircraft was being refueled, we again had breakfast, owing to the change of time. We left Gander at ten o'clock and climbed to a height of 7,000 feet; speed, 190 m.p.h. On crossing the coast of Canada we flew at a height of 5,000 feet. From this height we could see the beautiful country of Canada, full of lakes and forest land.

At four o'clock we arrived at Malton, just outside Toronto. We were greeted at the airport by the Commissioner for Ontario. We were given a great welcome. The heat was terrific. After passing through the Customs, etc., we were taken by bus to the Rotary Hall, Toronto, where we were linked with our hosts, Mr. and Mrs. Carmode, of Toronto. On arrival at their home we were given our first sample of Canadian food. After our first Canadian meal, we were rushed off to bed by our hosts who reminded us of our early morning start.

At seven o'clock next morning we found ourselves at breakfast and before long we were on our way to the docks where we met the rest of the British contingent. The ferry-boat "Cayuga" had been chartered to take the British and Canadian contingents across Lake Ontario. The voyage took some 2-1/2 hours and was very smooth. On arrival at Niagara-on-the-Lake we were greeted by some two hundred Scouts and Scouters. After going ashore we marched to the Jamboree Camp site. At the Jamboree H.Q. we were directed to our sub-camp H.Q. and from there to our camp site. After supper, work began. Before very long our tents were up and our kits unpacked. By 10:30 we were all in bed, tired after our journey. 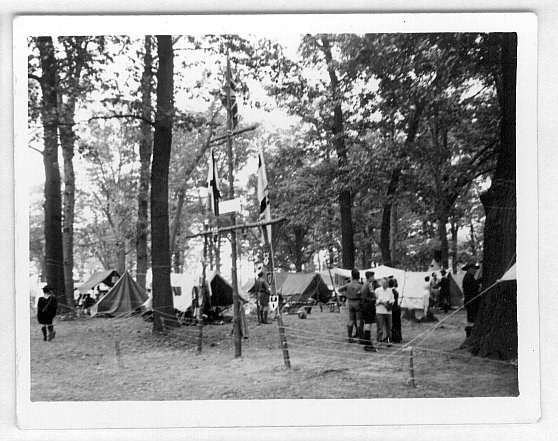 After breakfast next morning we were once more at work. By dinnertime everything was in order and our Ulster flag flew alongside the Union Jack. After dinner that day we were free to do as we pleased. Before long badges, knives, etc., were being exchanged by Scouts from all over the world.

On Saturday, 20th August, the official opening ceremony was performed by the Rt. Hon. Vincent Massey, C.H., Governor-General of Canada, in his capacity as Chief Scout of Canada. Scouts from all over the world were present for this great occasion. The heat on that day was terrific; a few Scouts from colder parts of the world fainted.

The Jamboree site itself was a terrific spectacle. It consisted of seven sub camps, Atlantic, Alouette, Great Lakes, St. Lawrence, Bonaventure, Hudson Bay, and Timberlands (this was the sub camp we were in). The Jamboree had its own shops and trading posts where one could buy anything. We even had our own hospitals and fire engines. 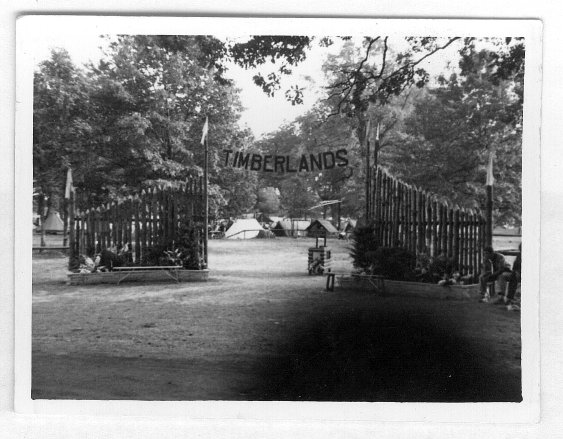 Fresh food was supplied for every meal. We were able to eat lots of fruit such as peaches, grapes, etc. There was a special Jamboree newspaper which was on sale every day. International signposts were used to enable Scouts from other countries find their way around the Jamboree site. The Jamboree had its own special police force. Everyone had to be in bed for eleven o'clock at night. It had its own arena with seating capacity for 10,000 visitors. Surrounding the arena were the flags of all the nations represented. The Jamboree was open to the public each day after dinner-time. Visitors came from all over Canada and America. 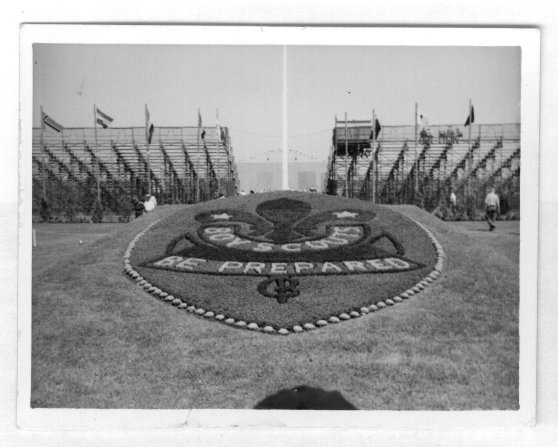 Day after day the Ulster contingent was surrounded by visitors asking about Northern Ireland and friends at home. Shows were put on in the arena each day by Scouts from different countries. The Ulster Troop put on Irish dancing. 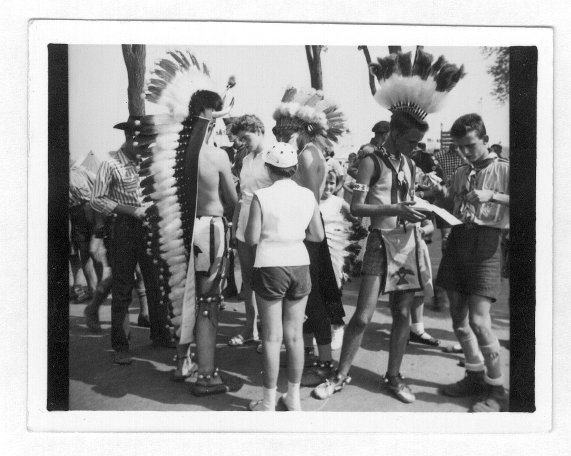 On Sunday, 21st August, Bob Rankin and Graham Dinsmore paid us a surprise visit. Bob has made a movie of the Jamboree which he intends to show the people at home when he returns after Christmas. 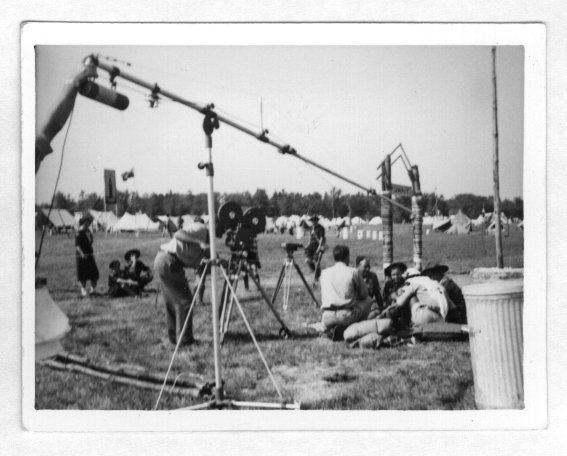 During the Jamboree we made broadcasts for the C.B.C. and appeared in C.B.C. and American television networks. On Wednesday night George and I were taken by Mr. Billie Yates and his wife and Mr. Frank Peacock and his wife (all from Coleraine) to see Niagara Falls at night. It was terrific to see the entire falls illuminated by coloured lights. 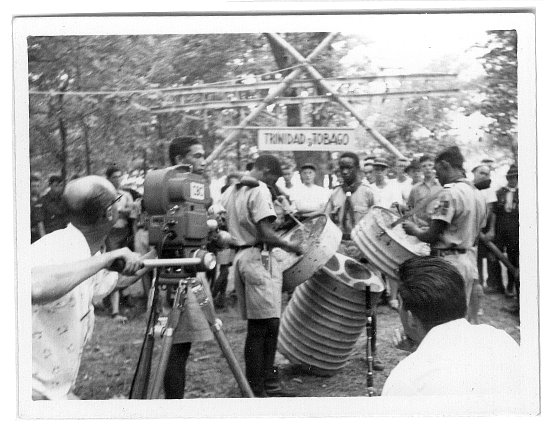 During the Jamboree we fraternized with Scouts from all over the world. We were taken in special buses on tours to such places as Niagara Falls, Brock's Monument, the great hydro-electric plant outside Niagara, and many other places. We crossed the great bridge which spans the mighty Niagara river. We were also taken to Toronto to see the Canadian National Exhibition of 1955, and throughout the Jamboree we were given every opportunity to see the Canadian countryside. 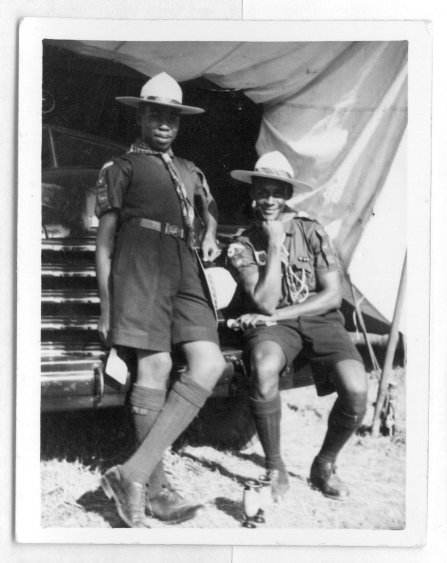 Saturday, the closing day of the Jamboree, came all too quickly. Lady Baden-Powell and Lord Rowallan (Chief Scout of the World) were present to bring this great Jamboree to a close. As the sun was setting Scouts from all over the world marched arm in arm into the arena. During the closing ceremony, Lady Baden-Powell spoke on the success of the Jamboree. She said it was an occasion never to be forgotten. One by one the flags of the nations were lowered, and so this great 8th World Jamboree in Canada ended.

On Sunday morning, the Jamboree broke up. Slowly troops from all over the world left the Jamboree camp sites. We, the Ulster contingent, went on board the "Gayuga" which took us back to Toronto. During the journey we sang Irish songs to the passengers. In Toronto we were met by our hosts and once again taken to their home to spend a week before going back home. We were all impressed by the Canadian way of life. The food was different. They only have three meals a day — breakfast, dinner and supper.

During my stay I was taken away up north to see some of the great lakes and forest lands of Canada. I stayed up north for 2-1/2 days. On arriving back in Toronto I was taken with a few other Scouts, by Mr. Carmode to the Kiwanis Club for dinner. Every day our hosts had something planned for us to do and see. I was able to visit Mr. and Mrs. Glass and family and Jim and Bob Blair, all of Coleraine. All too soon my visit to Canada was over.

A farewell party was given by Mr. and Mrs. Carmode in our honour on Saturday night. All the people from Coleraine I had met during my visit were invited together with some Ulster Scouts. We had a great time. The Coleraine people found it hard to say goodbye.

On Sunday morning, thirty-one very sorry boys left Malton airport for home. We all shall never forget the send-off the Canadian people gave us, and shall always be in their debt. From Malton we flew direct to Gander in Newfoundland, and then back home to Nutt's Corner. The trip took 18 hours 20 minutes. We landed on Monday at 10 a.m. Because of bad weather off the North-West coast of Ireland we came in from the North. We passed over Portstewart and to the starboard we could see Coleraine 4,000 feet below. It was raining as we stepped from the aircraft.

Now to all of us this 8th World Jamboree is just a memory, but one which will live forever in our minds.

On behalf of George Lyons and myself, I say thank you to the local Association, to Mr. Jack McDonald, and the Scouters and Scouts of 1st Coleraine Troop who made possible our visit to the 8th World Jamboree held at Niagara-on-the-Lake. 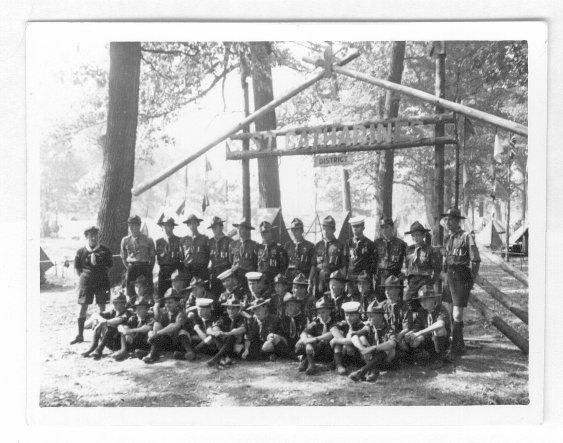